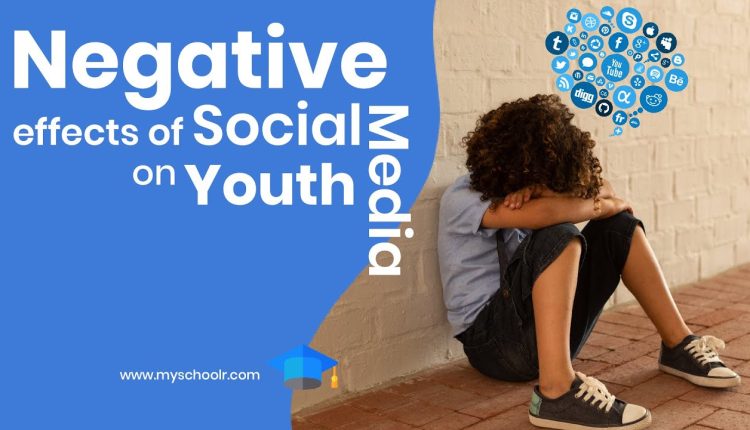 Undoubtedly, the 21st century is the century of globalisation, connectivity, technology, and the golden horn for humanity. However, social evils and fixations have existed throughout human history; only their form and shape vary.

Social media is one of the course altering innovation of human history. In contemporary times, it has become a source of earning for millions of people and has aided people from all over the world to connect through interactive applications like Facebook, Instagram, Twitter, Reddit and many more. Social media has helped the masses create their new businesses, share their thoughts and ideas with the world, and contribute at a colossal level to making this world a better place.

However, nothing is perfect in this mortal world; hence, social media also constitutes some hazards and drawbacks that impact people, especially our young generation. As a perturbed citizen of Pakistan, I will provide an insight into the detrimental influence of social media on the young minds of Pakistan. We have often heard of a proverb that excess of anything is harmful; similarly, excess and misuse of social media are also harmful. Moreover, in an underdeveloped country like Pakistan, where poverty and nescience prevail, free access to social media and the internet has caused many social malaises, especially among youth.

Excess use of social media sites has led our youth to social media addiction. Of course, most of them would not feel it, but the reality is that it is affecting their lives mentally, physically, and morally. Lamentably, our youth is standing at such a point that they cannot spend one single day without scrolling their Instagram posts, checking their Facebook notifications, shopping online, spending hours watching their thrilling seasons on Netflix, playing video games, and getting inspired by the fashion sense of models and celebrities. We have seen a ridge in social media addiction, especially after the Covid-19 pandemic; during the pandemic, our youth have no other choice but to interact through social media with their friends and for academic purposes, but it has created many complications for both youth and their families as well.

The first visible negative influence of social media on our youth is that they have become languid both cognitively and physically. They do not take an interest in their studies and outside activities. Their behaviour towards their parents and family members worsens day after day. They transgress, misbehave, curse and shout at their parents when asked to do something. Thus, parents thrash their children and turmoil is created in a merry family.

The second notable negative influence that has influenced our youth because of social media is sleep deprivation, which ultimately drives youth to suffer from cognitive disorders like depression, stress, and anxiety at such a young age. According to detailed research, youngsters or teenagers who spend 70% of their day on social media are likely to suffer from sleep deprivation because they use social media through various devices like cell phones, tablets, and laptops. These devices emit harmful rays that eventually put pressure on the brain and stop the brain from producing a chemical known as melatonin required for sleeping. Thus, when youngsters cannot get enough sleep, they cannot execute their tasks and duties efficiently throughout the day, leading to depression and a state of anxiety.

The third vital negative influence that has affected our youth is unrestricted and smooth access to inappropriate and sexually explicit videos on social media. Even if they are not watching such content, certain graphic ads will automatically pop up, which eventually arouses their sexual feelings; thus, they do explicit acts like watching pornography and masturbation. Furthermore, with long-term involvement in these acts, youngsters have sexual problems, especially infertility and other sexual illnesses. Moreover, they are shattered religiously after doing these acts, and their soul is sabotaged since these acts are proscribed in Islam. It ultimately leads them to isolation, depression, and other cognitive disorders. Hence, proving detrimental to them both physically and spiritually.

The fourth eminent negative impact that has wedged our youth because of social media is that they are becoming the prey of cyber-criminals. In Pakistan, many young girls and boys have become victims of cybercrime as their data is leaked or hacked. These hackers then blackjack them for money and other demands; otherwise, they threaten to oust their photos and private data into public, destroying their dignity in society. Nevertheless, sometimes, one becomes vulnerable to cybercrime lawfully in a sense that while using social media sites and applications, an umpteenth number of our youth do not read their privacy policy agreement and agree without reading which ultimately leads to legally allowing those sites to share and peddle one’s data to other companies and applications.  Furthermore, PTA (Pakistan telecom authority) has not done much to safeguard the data and maximise the cyber security of Pakistan. Consequently, causing vulnerability to cyber-attacks and data leaks.

Finally, the most crucial detrimental influence of social media on the young minds of Pakistan is that they are being fallen into the snare of fifth-generation warfare, also known as propaganda warfare or information warfare. In this type of warfare, the enemies of Pakistan, especially India, with the help of social media sites, are attempting to change the narratives, ideology, and nationalist beliefs of Pakistani youth. They are trying to mould our youth’s brains and make youth speak against their country’s national interests and institutions, especially against our armed forces. Most of their victims are youth studying in higher education institutions like colleges and universities. Recently it has been noticed that many students at universities in Pakistan, specially LUMS and Quaid-e-Azam University, are speaking against the national interests of Pakistan. They are openly criticising their nation’s forbears and armed forces. They are intoning slogans like “ye jo dehshat gardi ha es ke peeche wardi ha”, meaning that the army is behind terrorism in the country.

The question arises about who is doing that; there may be other reasons, but social media is the central construct in this scenario. India, an open enemy of Pakistan, opposes Pakistan in all international forums, including the UN (United Nations) and FATF (Financial action task force). For instance, in August 2021, Indian social media outlets started screaming that Asia’s Pacific Group (APG), a regional body of FATF, had placed Pakistan on the organisation’s deny list. Thus, Indian media and their social media are defaming Pakistan and making its youth believe that their state is sponsoring terrorism, and unfortunately, most of the youth surmise it. Thus, India plays a decisive role on the external front by changing the Pakistani youth narrative that the Pakistan state and the army are sponsoring terrorism.

On the internal front, social media sites of anti-Pakistan movements like Baloch separatist groups like BLA)= and Pashtun Tahafuz Movement (PTM) play a pivotal role by making propaganda videos. These videos are so cleverly persuasive that most watchers believe them without any second thoughts. They spread propaganda about the army that it is the Pakistan Army that does not allow the development of Waziristan. They promulgate that the Pakistan army kills innocent citizens of Waziristan – charges that are baseless and a total lie. There are intelligence reports that RAW (Indian Intelligence Agency) is funding them and assisting them in propagating such anti-Pakistan narratives.

Now, it is the duty of youth not to be misguided by such false propaganda and refute it by whatever means possible. Vigilance is the eternal price of liberty.

Social media is a reality that no one can ignore it in contemporary times. It is indubitably directly or indirectly involved in our life voyage. Moreover, it is deep and widely stretched like a milky way. So, keeping that in view, as a concerned citizen of Pakistan, I propose that social media as a subject should be taught in schools, colleges, and universities. Seminars and workshops should also be organised on social media awareness. Hence, now it is up to us, and our youth to use social media wisely and not get addicted to it and ruin our lives.

The author is undergraduate student studying BS Defence and Strategic Studies at Quaid-e-Azam University, Islamabad. He is also working as an intern at Monthly The Consul magazine.