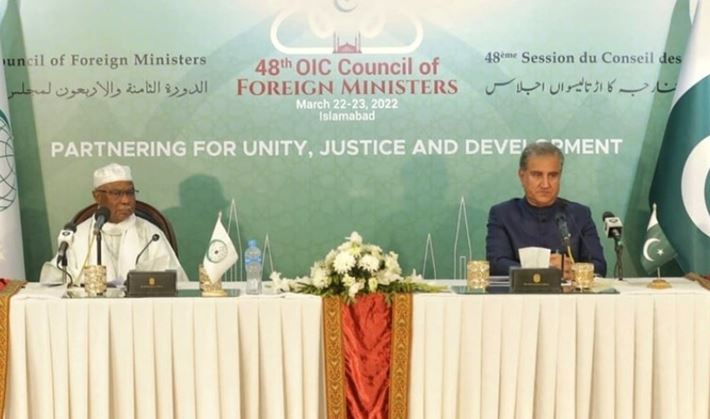 The highlight of the two-day conference of Organisation of Islamic Cooperation’s Council of Foreign Ministers was its strong affirmation of support for the cause of Palestine and Jammu and Kashmir freedom struggles.

OIC Secretary General Hissein Brahim Taha, while speaking at a media conference at the end of the 48th meeting of the 57-member body, said: “Palestine remains high on the agenda of OIC and was discussed thoroughly. All participating ministers reiterated their support for the Palestine cause.

“The question of Jammu and Kashmir was thoroughly discussed. This is a just cause. It has our full support. The conference reaffirmed our stance and reiterated support for the right of Kashmiri people to self-determination.”

Forty-six countries participated in the moot at the ministerial level, while the other countries were represented by senior officials. Nearly 800 delegates attended the Islamabad meeting. Chinese Foreign Minister Wang Yi was the special guest at the conference. It was the first time in OIC’s history that a Chinese foreign minister attended its foreign ministers’ meeting, indicating Beijing’s expanding role in the Muslim world.

The meeting agenda included deliberations on the situation in Palestine, Indian Illegally Occupied Jammu and Kashmir (IIOJK) and Afghanistan. Also, issues pertaining to Africa and Muslims in Europe and developments in Yemen, Libya, Sudan, Somalia and Syria were taken up at the meeting. Islamophobia, international terrorism and cooperation in economic, cultural, social, humanitarian, and scientific domains were the other subjects that were discussed.

A wide-ranging Islamabad Declaration containing as many as 70 points was adopted by the meeting.

Mr Qureshi said a ministerial committee of OIC would work with other states to “go beyond resolutions” on Kashmir and “chart the way forward”. An action plan will also be formulated in this regard.

He said the OIC Contact Group on Occupied Kashmir decided that its members would meet more frequently to coordinate their positions on the dispute and monitor human rights violations. “We have a clear plan of action (on Kashmir) for the members of contact group, the secretary general, the secretariat, the special envoy, and the OIC independent permanent human rights commission,” he maintained.

Islamabad Declaration renewed solidarity with the people of Kashmir and expressed full support for their inalienable right to self-determination. It condemned the human rights violations in the IIOJK and rejected India’s illegal and unilateral actions related to Kashmir since August 5, 2019.

“We declare that the final settlement of the Jammu and Kashmir dispute in accordance with UN Security Council resolutions is indispensable for durable peace in South Asia. We reiterate our call on India to: a) reverse its unilateral and illegal measures instituted since 5th August 2019; b) cease its oppression and human rights violations against the Kashmiris in IIOJK; c) halt and reverse attempts to alter the demographic structure and to redraw electoral constituencies in IIOJK; and d) take concrete and meaningful steps for full implementation of the UN Security Council resolutions on Jammu and Kashmir,” the OIC participants stated in the Islamabad Declaration.

The OIC foreign ministers also expressed concern over Indian missile striking a building in Pakistani territory on March 9 and put their weight behind Pakistan’s demand for a joint probe with to accurately establish facts.

“We acknowledge Pakistan’s pivotal role as an anchor of stability in South Asia, and commend its role and efforts for promotion of regional peace, based on the UN Charter principles including sovereign equality of States, political independence, non-use or threat of use of force and pacific settlement of disputes,” the foreign ministers noted.

Mr Qureshi said the participation of Chinese foreign minister indicated Beijing’s desire to expand ties with Muslim countries and its willingness to invest about $400 million in Muslim countries under its Belt and Road Initiative.