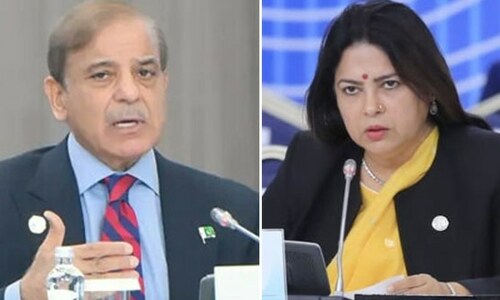 Prime Minister Shahbaz Sharif says Pakistan is expecting to have a meaningful dialogue with India for regional peace and prosperity, but that it is up to India to play a role for sustainable peace in Asia and show sincerity towards such meaningful dialogue.

He said Pakistan wants a peaceful atmosphere for its future generations.

The premier was addressing the sixth summit of the Conference on Interaction and Confidence Building Measures in Asia in Astana, Kazakhstan on Thursday.

“I am absolutely ready and willing to have a serious dialogue and discussion with our counterparts, Indians, provided that they show sincerity of purpose and they show that they are ready to discuss issues that have really kept us at a distance over decades,” PM Shahbaz said.

He said peace will not be established in occupied Kashmir until Indian atrocities end.

India is using military force in occupied Kashmir to claim democracy and has deprived the people of the occupied valley of their right to self-determination, he highlighted, adding that India has been oppressing them for the last seven decades.

Speaking about the floods in Pakistan, the premier highlighted the need for immediate help to rehabilitate the country’s 33 million climate refugees affected by the recent devastating rains and floods.

“Pakistan is living through a colossal climate induced climate,” he said, adding that unprecedented rains and flooding that have submerged one third of Pakistan and it is all the consequence of global warming and climate change.

He said according to initial estimates, the calamity has caused a loss to the tune of over thirty billion dollars.

The Prime Minister said the government has marshalled all the resources at its disposal for the rescue, relief and rehabilitation.

PM Shahbaz said though Pakistan is responsible for less than one percent of global carbon emissions yet we are amongst the ten top countries most severely impacted by climate change.