Pakistan and the new world order 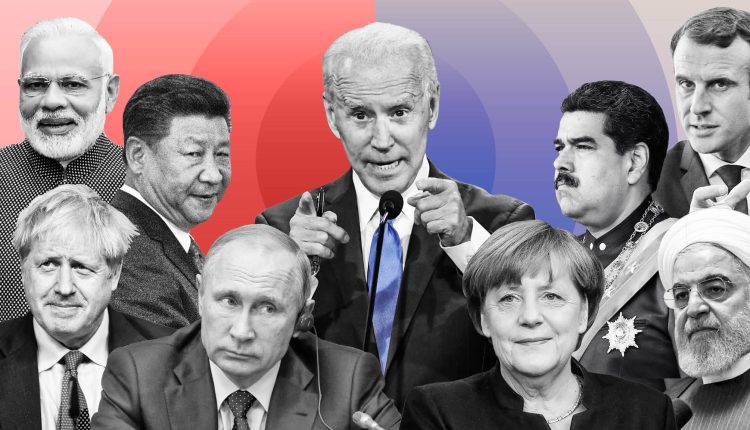 US strategic ties with partners:

The US is strengthening its strategic relationships with the UK, Pakistan, Australia, Japan, India, Israel, etc., trying not only to contain the Peoples Republic of China and thwarting the rise of the Russian Federation but also to choose winners for the future world order. And US, UK, Australia, Canada, Japan, India, Israel, Saudi Arabia, United Arab Emirates (UAE), Singapore, etc., are getting ready to play dominant roles in the future as well.

India which is a very large country is further expanding through colonizing others and occupying lands through brute force, while some really tiny countries like Israel have been expanding their borders through occupations. Some tiny states like Israel and Singapore are trying to create other countries’ dependence on them, through providing strategic supplies like  power transmission lines, that will oblige countries and increase their dependence on them. Countries like Turkiye are planning to revive their glorious past through strategic planning.

But world powers have also selected countries for new world order that will be losers and demolished and fragmented, with their resources and manpower available to the winners, to dip into as and when they need them in their quest to become more powerful.

Countries who will facing wrath of big powers:

Pakistan, Iran, Sri Lanka, Nepal, Turkiye, Malaysia, Indonesia, North Korea and a large number of countries in Asia, Africa, the Caribbean, Latin America, etc. These countries are being queued up for bashing by world powers. In an earlier article I had discussed the use of state power to demolish states, break down established order and make their resources available to the winners. In some of these countries many in the corridors of power have been compromised and are working in connivance with world powers in return for personal gains. While others are genuinely trying to fight the onslaught to save their countries. Countries on top of the queue at present are Pakistan and Sri Lanka.

In Pakistan the attention of the entire country is diverted towards petty fights between the politicians and the politicians and the establishment. The public is engaged in the political dramas being enacted starting in April 2022, the formation of the Punjab government with all the hiccups, the ongoing national debates on whether Dr Shahbaz Gill was tortured or not. And if he was tortured where the torture took place, in the jail or police custody? Whether Imran Khan is going to be arrested? The grant of protective bail to Imran Khan and whether the crackdown is being orchestrated by the “Neutrals”? As if these political dramas were not enough, the torrential rains and flooding have thrown more things to ponder about. Questions are being asked whether the present calamity is due to climate change or US targeting Pakistan through activating the HAARP to add to the crises being faced by Pakistan?

Almost all the important characters in the corridors of power appear to be acting according to a prepared script. They are diverting attention from Pakistan having become a garbage dump for the world.  The increase in prices of food, the constant increase in prices of electricity, gas and petrol and the resulting increase in the cost of doing business. All this is causing closure of industries, loss of employment and the resulting poverty with its ugly manifestations like robberies, murders, etc., as per the Durkhmanian Modernization Perspective. These political dramas in Pakistan are diverting attention from India turning tourist attraction sites in Gulmarg and Sonamarg into military garrisons. The settling of outsiders in Jammu, Kashmir and Ladakh by the Modi government, the hunger strike by JKLF chairman Yaseen Malik are going completely unnoticed due to the political circus being enacted in Pakistan.

Looking at Pakistan’s population demographics we find that 64 % of the population is 30 years of age or less. The reduction in expenditures on health and education due to IMF conditionality since the 1990s means that most of those born during the 1990s have not been educated. What are we going to do with this uneducated, illiterate population bulge? Countries which have strategic plans and might be engaged in battles for strategic supremacy will most probably use them in their conflicts and wars in return for peanuts. Which means that a large number of Pakistanis are just waiting to be used as war fodder in order to be able to give their families one square meal!

The present situation in Pakistan shows as if enemies of Pakistan have taken over the reins of the government. All those in the corridors of power are delivering not only to the US-UK but India as well. IMF conditionality of handing over SBP to the IMF, allowing the free fall of the Rupee, arrival of Indian planes to take out our precious foreign exchange, letting India decide the future status of JK & L in violation of UN resolution and ICJ articles, and the annexation of Azad JK & L to justify Indian annexation of Occupied JK&L, distancing Pakistan from Afghan Taliban by withholding recognition reveals that those who delivered on all these were compromised people. The fact that such a large number of those in the corridors of power in Pakistan are compromised points to the decline in moral and ethical values in the country. It shows how vulnerable we are and at the total mercy of compromised leadership.

Why Muslims who believe in Allah and hereafter have such low morality? And compare them with the zero tolerance for corruption in the higher echelons of the Chinese government, and the pursuit of Russian interest by President Putin against heavy odds. Look at the moral strength of the Afghan Taliban who have sacrificed their kith and kin to protect their sovereignty. Compromised people in Pakistan’s corridors of power should remember what happened to the Algerians who sided with the French during the Algerian War of Independence. When Algeria became independent these touts had to leave Algeria and migrate to France, where they had to live in the worst ghettos in France. In these ghettos poverty and crime rates were very high. These touts didn’t realize that they were useful to the French authorities only as long as Algeria was a colony. But their future lay in a French ghetto, where they paid for the sins they committed against their own people and their motherland!