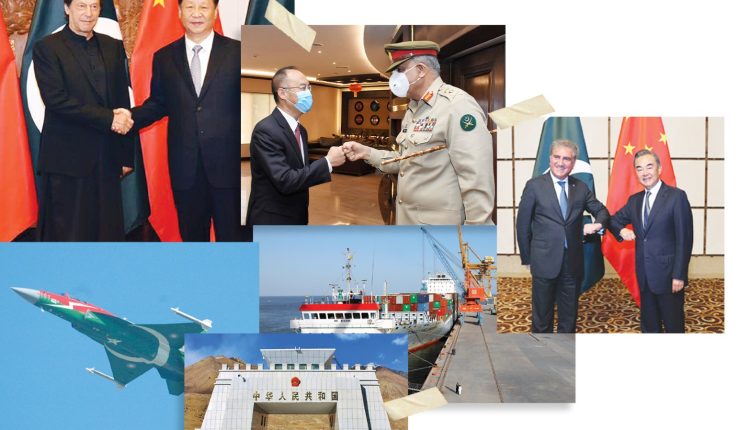 Jinnah’s vision regarding Pakistan’s foreign policy was very clear and concrete since independence. Pakistan always wished to have close, friendly, and bilateral relations with its neighbor states for the establishment of International peace and security.

China and Pakistan have a close strategic partnership and rich history of cooperation and friendship. In the Foreign Policy of Pakistan, friendship with China has always been a Flintstone. The People’s Republic of China lies on the North side of Pakistan and shares a border of 600 km. “Sin Kiang” is a China’s province in China that touches the border of two states.

Bilateral relations began in 1949 when China came into autonomy. Pakistan was the first state in its international recognized. In September 1950 Pakistan’s ambassador presented his appointment papers to Chinese leader Mao-Tse-Tung.

Pakistan supported China in making it a permanent member of UNO, and then in 1959 China was one of those five states which had veto power. In 1961, Pakistan and Chief started their efforts to settle the boundary disputes and other matters agreement was signed in 1963 which the demarcation of the border. As a result, Pakistan gained an area of 3400 square, and it initiated trade between the 2 states. Consequently, an Ordnance Factory was established in Taxila and Karakoram highway was completed in 1969.

Both states signed various treaties, agreements, and contracts for further cooperation. Pakistan is the first state to participate in free trade agreement investments, initiated and implemented by China.  The FTA would benefit both countries. Both countries had removed taxes and tariffs in trade relations. Both of them access their markets freely without tax and tariff.

Both states then agreed to the K-8 project for the development of aircraft, Babur cruise missiles, Al-Khalid tanks, and the S system. (balloon warning and control systems). Pakistan has also purchased air missiles from China including the advanced HQ-18. China also agreed to provide four Pakistani naval frigates. Three have been offered since 2009, the last one – in 2013. Islamabad also purchased six submarines from Beijing recently.

Today, China is the greatest supplier of weapons to Pakistan, and nearly 40% of China exports various weapons to Pakistan. Besides this, both states are allies in developing energy projects. China has built Gwadar Port, this port is 400 km from the Hormuz Strait where 80% of energy travels along this trade route.

President of Pakistan General Muhammad Ayub Khan visited China in 1964 and during this visit, China supported the Kashmir dispute for the first time. In 1987 Chinese PM and Chinese Defense Minister visited Pakistan. The visits of Pakistan’s President Pervaiz Musharaf also strengthened the diplomatic and bilateral relations of both states.

Pakistan and China have made progress in the areas of the economy, defense, politics, trade and social development too through high-level diplomacy. China is also struggling to make access to Central Asia through Pakistan and to the Indian Ocean to become a great naval force in the entire world. China has enhanced its economy to peak in the entire world.  One Belt One Road is a grand strategy because China wants to connect to the entire world through this strategy. China has started these projects in various states such as Sri Lanka, Nepal, Bhutan, Bangladesh, and in Pakistan. CPEC is one of the projects of BRI and through this China also wants to invest in third world countries to abolish poverty and improve living standards, to promote economy and development in those states.

CPEC was launched in 2013. Pakistan has relied on the rapid implementation of CPEC for economic growth and development. Initially worth $ 47 billion, as of 2021, the CPEC project was worth $ 62 billion. As of 2018, things weren’t going well when the PTI government came to power. But attacks on Chinese officials in Pakistan didn’t slow the project’s progress and under the PTI government, the project hit different obstacles.

Pakistan sees incredible development potential within the framework of the project in the areas of agriculture, energy, industry, and transportation. Pakistan will learn from the experience of modernization of China’s agricultural sector by focusing on regional agriculture, developing new crops to increase yields, introducing new types of agricultural products, and developing the agricultural industry.  Experts have proposed agricultural technology zones to improve cooperation in this area. The best starting point is the cooperation between Faisalabad Agricultural University and Chinese Universities.

China’s Global Innovation Center (GIC) plans to set up an office in Pakistan. GIC is active in the field of international cooperation in the technical field. Sino-Pak cooperation in the field of solar energy is one of the lights of hope to replace energy from coal. In April of this year, China-based C & D Clean Energy announced a partnership with Pakistan’s Integra Solar for module supply chain services. According to the reported LOI, Clean Energy will provide a Pakistani company an integrated supply chain service for 100 MW solar modules in 2022. Now that rising temperatures are a global environmental problem, there is ample room for cooperation in this area.

The most notable development in the future is the completion of the ML1 project under negotiation with the Chinese government. The ML1 initially cost $ 9 billion but was later revised to $ 6.8 billion. After the completion of Main Line 1 (MLI), the Pakistan Railways is expected to carry more than 20% of the country’s freight under CPEC, which will help make the ministry a profitable organization. At present Pakistan Railways reportedly carry only 4 percent of the country’s freight transport. From Peshawar to Karachi ML1 is an 1872 km route and it is expected that it would create 24,000 new jobs.

The “strategic partnership” between Pakistan and China was not achieved overnight. It required 50 years of constant struggle by the leaders and people of both countries. The fact of the matter is that the friendship between Pakistan and China is very important for stability and balance in South Asia and the region as a whole. And this friendship will continue to grow.