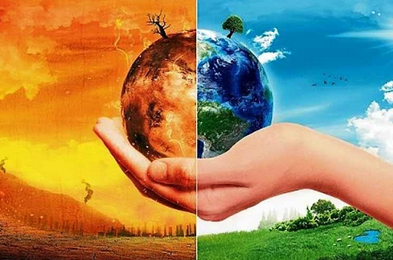 Economic costs from the combined impacts of the climate change estimated by the United Nations Economic and Social Commission for Asia and the Pacific (UN-ESCAP) show that Pakistan will have the highest losses as percentage of GDP at 9.1 per cent.

In South and Southwest Asia, the total average annual loss is estimated to be $161 billion in the current climate condition. This estimate increases to $217bn under the moderate climate change scenario and to $322bn under the worst-case climate change scenario, says UN-ESCAP report, “Pathways to Adaptation and Resilience in South and Southwest Asia” released recently.

In absolute terms, under the worst-case scenario, India is set to record the highest average annual loss at $225bn, followed by Pakistan at $26bn and Turkey at $24bn. However, when average annual loss is assessed as a percentage of the country’s GDP, under the worst-case climate change scenario, Pakistan will have the highest losses as percentage of GDP at 9.1pc, followed by Nepal at 8.7pc and India with estimated losses equaling 8.1pc of its GDP.

Climate change is increasing the occurrence and intensity of natural hazard-induced disasters, leading to a reshaped riskscape for South and Southwest Asia. Over the past 50 years, natural hazards in South and Southwest Asia have affected over 3bn people and killed more than one million. The sub-region accounts for 44pc of all fatalities from disasters and 50pc of the people affected in the Asia-Pacific region.

Climate change scenarios for the near and far future suggest that drought conditions are likely to become more severe in the region. The variation in rainfall pattern and projected higher temperatures will likely cause more frequent, extreme, dry conditions. Projected scenarios for 2040-59 show that multiple areas in India, Pakistan and Turkey are likely to experience a significant increase in the maximum number of consecutive dry days.

The report warns that climate change will impact the lives and livelihoods of population dependent on dryland agriculture in South and Southwest Asia.

The increase in mean temperatures in hyper arid and arid areas will have a significant impact on dryland agriculture in Afghanistan, India, Iran, Pakistan, and Turkey.

In Pakistan, almost 77pc of the agricultural production in arid regions will be exposed. This could pose a threat to related livelihoods and food security in the country, the report says.

The convergence of biological and natural hazards together with climate change has added significantly to the already prevailing stresses of poverty and inequality in South and Southwest Asia.

In August 2020, during the Covid-19 pandemic, the monsoon floods in South Asia heightened the risk of dengue and malaria outbreaks and stretched health resources to their breaking point.

Recent decades have seen an increase in the risk of climate-related diseases leading to illness and death. South and Southwest Asia have witnessed a sharp rise in dengue cases. The records have risen from less than 100,000 cases in 1990, to nearly 400,000 by 2018. On the other hand, for malaria, the total number of confirmed cases in South and Southwest Asia has gradually decreased from nearly 2.5 million cases, in 2000, to nearly 1.3 million cases, in 2017.

While responding to the pandemic, South and Southwest Asian countries also faced natural hazards ranging from one of the strongest recorded cyclones in the region to flash floods caused by glacial lake outbursts, heat waves, and locust storms.

ESCAP analysis shows that in South and Southwest Asia, nearly one billion people who are in the low and medium human development index category will also be exposed to high multi-hazard cascading risks. This figure will rise to 1.3bn people across the sub-region in the worst-case climate change scenario. The highest percentage of population exposed to these risks is in Bangladesh, India, Nepal and Pakistan.

The convergence of climate change, and natural and biological hazards will also increase child malnutrition in Pakistan; the children at greatest risk live in Balochistan, Sindh, and Khyber Pakhtunkhwa. In these areas, it will be important to ensure that critical infrastructure and means of service delivery like hospitals, schools, and electricity grids, are resilient to the impacts of cascading hazards. For women, the risk will be greatest in Balochistan and Punjab.