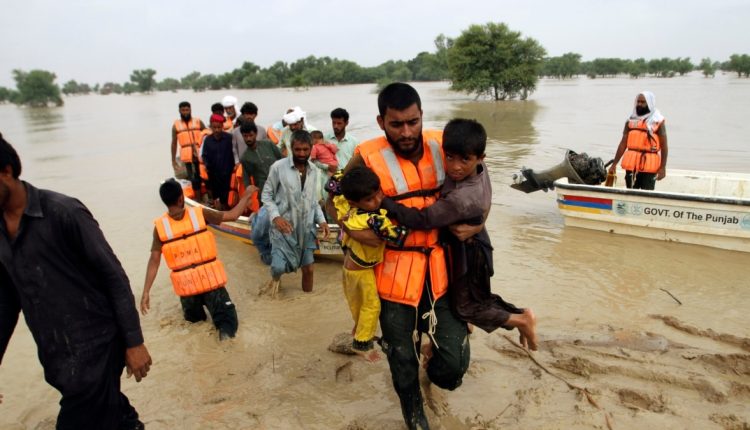 Large parts of Pakistan have been devastated by one of the deadliest rain floods in its history. Weeks of flooding triggered by historic monsoon rains have killed nearly 1,000 people and badly affected 33 million others. Southwestern Balochistan and southern Sindh provinces have been the hardest hit. Overflowing rivers and ravaging floodwaters submerged towns and washed away villages, bridges, roads and other infrastructure.

Pakistan has seen from early this year unrelenting waves of heat wave, forest fires, flash floods, multiple glacial lake outbursts and now the heaviest monsoon of the decade. As a result of the raging floods, Millions are without shelter; a majority of them are without food. Tens of thousands of people are stranded. Rescue teams, assisted by Pakistani military troops, are erecting tents and shelters in the flood-affected areas, where many are still without food and shelter.

Media reports show that more than 1000 people have died since mid-June, including 343 children. More than half of the casualties are from Balochistan and southern Sindh province where 234 and 306 people died respectively amid record rains that have affected half a million houses in remote villages.

Over 100 districts across four provinces have been hit by the floods, with Balochistan’s capital Quetta isolated from the rest of the country for several days as many highways and bridges have been swept away by the deluge.Bottom of Form In Khyber Pakhtunkhwa province, where nearly 200 people have been killed, rescue efforts are in full swing, particularly in the worst-hit areas of Swat and Dir which have seen the flash floods situation worsening, with a lot of population on the banks of the river.

An idea of the havoc caused by the monstrous rains can be had from the fact that Sindh received 784% more rainfall in August than the annual average, while Balochistan received almost 500% more, according to official data. The National Disaster Management Authority has disclosed that since mid-June, when the monsoon seasons began in  Pakistan, more than 3,000 kilometers of roads, 130 bridges and tens of thousands of homes have been damaged across the country. Standing crops have also been destroyed over vast stretches of land.

Experts blame climate change for the deadliest flooding that has hit Pakistan in more than a decade. According to the Pakistan Meteorological Department, the country saw its wettest July since 1961. But this is not the end of the story. The Met office has sounded warning that another cycle of torrential rains could emerge next month.

Pakistan is said to be going through its 8th cycle of monsoon; normally the country has only three to four cycles of monsoon rain. Weather data suggests the possibility of re-emergence of another cycle in September. According to the NDMA forecast, parts of Punjab and Khyber Pakhtunkhwa might face “very high to an exceptionally high level of flooding” in the next few weeks. Balochistan also faces the threat of more flash flooding.In view of the death and destruction across all four provinces of the country, the authorities have declared a national emergency.

Needless to say, faced with a natural disaster of such scale Pakistan would require all the international help it could get because dealing with the disaster is beyond the capacity of federal or provincial governments. It is a double whammy. The calamity has struck Pakistan at a time when the country faces an economic crisis, with dwindling foreign cash reserves and historically high inflation.

The United Nations has responded by allocating $3 million to provide health, nutrition, food security, and water and sanitation services in flood-affected areas, focusing on the most vulnerable. The EU and other co other countries are also lending a helping hand.

As things stand, rainfall is making relief efforts difficult due to the inability of authorities to reach the affected areas. This underlines the need for aerial transportation which the army is providing.

In 2010, the floods were riverine in nature, which means they mostly impacted areas around the Indus River and they were mostly predictable. This time, there are multiple types such as urban flood, flash flooding and floods caused by glacier burst. The frequency of heavy flooding is also increasing.

Climate change is no doubt a threat multiplier. It has worsened the usual effects of the monsoon rains. But lack of advance planning is no less to blame for the flood-related disaster we are facing today. It is not only the excessive rain which is causing the issue, but rather the inadequate preparation and infrastructure. All those responsible for disaster management and precautionary measures should be taken to task for neglecting to act in time.