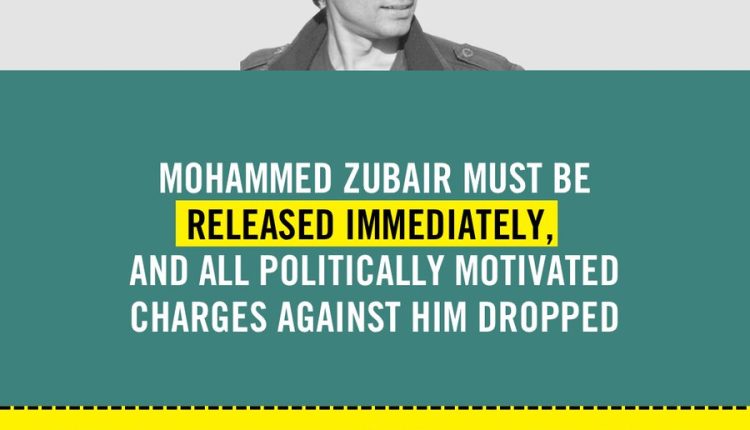 New Delhi: Human rights group Amnesty India has called on the government to released fact-checker Mohammed Zubair “immediately and unconditionally”. It demanded withdrawal of “all politically motivated” charges against him.

Separate FIRs have been lodged against Mohammed Zubair in five districts of Uttar Pradesh on charges of allegedly hurting religious sentiments. Zubair had played a role in drawing attention to incendiary remarks about Prophet Muhammad (PBUH) made by a spokesperson for Modi’s ruling BJP that sparked widespread protests across the Islamic world.

Chair of Board for Amnesty International India, Aakar Patel highlighted that Indian authorities are targeting Zubair for his crucial work to combat the rise in fake news and disinformation and call out discrimination against minorities. Patel added that the Alt News co-founder’s arrest is a clear violation of the right to freedom of expression, abuse of power by the authorities and sends a message that dissent is not tolerated in the country.

CPJ’s Asia Program Coordinator Steven Butler from Washington said, “The arrest of journalist Muhammad Zubair marks another low for press freedom in India, where the government has created a hostile and unsafe environment for members of the Press reporting on sectarian issues.”  Rahul Gandhi Tweeted, “Every person exposing BJP’s hate, bigotry and lies is a threat to them.” Muhammed Zubair’s detention is an alarming reminder that you are not allowed to speak the truth in India.