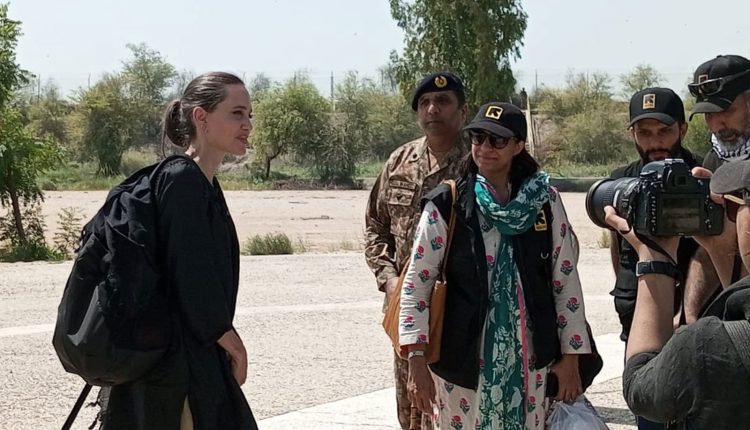 Humanitarian, activist and Hollywood star Angelina Jolie arrived in Pakistan on Tuesday afternoon to support and directly speak to flood victims. Angelina Jolie is currently in Dadu, Sindh where she is visiting surveying damage caused by the floods.

According to a press release issued by the International Rescue Committee, Angelina Jolie has arrived to witness and gain an understanding of the situation and to hear from people about their needs and steps to prevent such suffering in the future.

The actor Angelina Jolie reportedly arrived in Dadu’s Zamzama oil fields via helicopter and used a boat to survey the area in Johi and its surrounding areas. She is expected to provide aid to flood victims.

Angelina Jolie previously visited Pakistan in 2010 and 2005 to meet victims of the earthquakes. She is currently visiting as part of the the International Rescue Committee’s (IRC) emergency response operations.

The Maleficent actor will highlight the urgent support needed for the people of Pakistan and long-term solutions to address the crises of climate change and human displacement.

In the press release, the IRC hoped that her visit will prompt the international community — particularly the US that contributes the most to carbon emissions — to act and provide urgent support to countries bearing the brunt of the climate crisis.

IRC Pakistan Country Director Shabnam Baloch said, “The climate crisis is destroying lives and futures in Pakistan, with severe consequences especially for women and children. The resulting economic loss from these floods will likely lead to food insecurity and an increase in violence against women and girls. We need immediate support to reach people in urgent need, and long term investments to stop climate change from destroying our collective futures. With more rains expected in the coming months, we hope Angelina Jolie’s visit will help the world wake up and take action.”

The Committee’s latest assessment reveals that people are in urgent need of food, clean drinking water, shelter and healthcare. A survey reported that women and young girls have no access to menstrual hygiene products either. The IRC has reached more than 50,000 women and girls with humanitarian assistance, including hygiene kits to address the sanitary concerns raised by women.