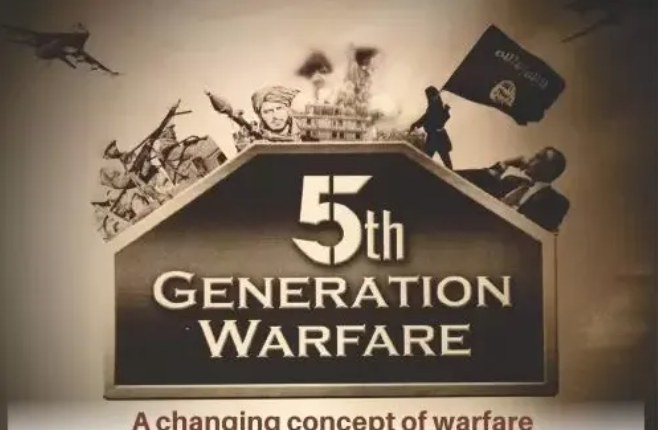 No thought, idea, or feeling can come to our mind automatically. Always there is an external factor involved. This is the 21st century and today war is not fought with swords, daggers or guns, but the way of war today is the Fifth generation war. It involves the use of propaganda and disinformation to confuse and mislead a nation with a view to turning the people against their own national institutions.

It is a method of warfare in which the opposing nation defeats the opponent without using any weapons or men of its own. Fifth Generation war is conducted primarily through non-kinetic military action, such as social engineering, misinformation, and cyberattacks, along with emerging technologies such as artificial intelligence and fully autonomous systems.

The Fifth Generation war is at its peak. Anti-Pakistan powers, by using Fifth generation war tools, have concocted various narratives targeting Pakistan’s national integration. These narratives relate to security, terrorism, ethnic issues as well as socio-economic problems. India has been operating numerous websites in various countries, flashing out anti-Pakistan propaganda in Europe and America. These websites were run by Srivastava Group, a front office of the Indian intelligence agency, RAW. Politicians of Pakistan have also become an unwitting part of Fifth generation war. Politicians tend to vilify the army for their narrow political ends.

Three major political parties of Pakistan (PML-N, PTI and PPP) have done this and some are still doing it. We have already done a lot of damage to the country by talking irresponsibly against our army. Let me take you back to 1971 when Sheikh Mujibur Rahman for his political advantage misled the people in East Pakistan (Bangladesh) against the army. If Sheikh Mujibur Rahman and Zulfiqar Ali Bhutto had settled their political differences and Sheikh Mujibur Rahman had not incited the people to revolt against his own country’s army, then today East Pakistan (Bangladesh) would have been with us. And we would have been stronger politically, defensively and financially today. Even today some people want to further damage Pakistan and they are poisoning the minds of the people against the army. False and fabricated propaganda against the security forces is going on which is orchestrated by foreign intelligence agencies and hostile organizations abroad. Pakistan’s army is responsible for both internal and external security. Whether it is floods or terrorism issue, our soldiers have always come forward to help the people. But misguided elements in our society unnecessarily criticize our soldiers who stand at the border away from their families and are ready to give their lives for us.

I dedicate this article to the soldiers and martyrs standing on our borders, and especially to Lt General Sarfraz Ali, who was martyred while helping the people of Balochistan. A few days before his martyrdom, these were some of his words that touched me deeply and I would like to share them with you.

“They abuse us, these are our brothers they are angry with us. Don’t abuse back. And when the time comes, give your life for them, because they are our brothers and we are their protectors”. – Lt General Sarfraz. Courtesy Daily Times