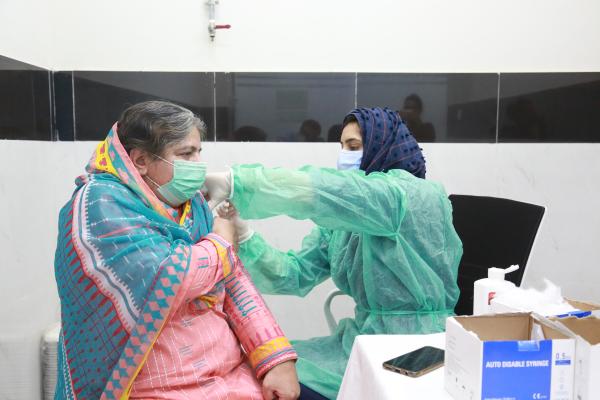 Amid fears of a resurgence of Covid-19, Pakistan on Friday reported nearly 700 new cases as the positivity rate rose to 3.9 per cent.

According to the National Institute of Health (NIH), 694 new coronavirus cases were recorded during the last 24 hours, up from 641 a day earlier. The number is the highest since March 10 when 723 infections were detected.

However, no deaths were reported during this period.

In a statement, federal Health Minister Abdul Qadir Patel said that the government was taking several measures to control the surge in cases.

The National Command and Operation Centre (NCOC) has been holding meetings on a daily basis to overview the virus situation in the country, he said. “But we want the public to adopt precautionary measures and follow standard operating procedures (SOPs) religiously.

“Specially during Eidul Azha, make sure you are wearing masks in public spaces and practicing social distancing,” the minister stressed. Avoid going to crowded areas, don’t hug or shake hands on Eid and get immunised against the virus, he added.

Patel also urged the ulema to ensure social distancing inside mosques and at religious gatherings.

Meanwhile, Sindh Chief Minister Murad Ali Shah held a meeting of the provincial task force on coronavirus, during which he emphasised that the positivity rate must be brought down before Eidul Azha.

The health secretary informed the meeting that the positivity had started rising in the province from June 24. The number of cases on that date was 248 while infections during the last 24 hours rose to 465, he said.

Shah noted that Karachi had the highest weekly positivity rate — 19pc — followed by Hyderabad at 0.39pc.

Giving a breakdown of district-wise positivity rates in Karachi, he said the rate in the metropolis’ East district stood at 29pc, followed by West at 21pc, South at 18pc, Korangi at 10pc, Central at 8pc and Malir at 7pc, respectively.

CM Shah directed the public to follow SOPs and get vaccinated. “Eidul Azha and Muharram events are coming up. We have to bring down the coronavirus positivity rate prior to these events. People should take precautionary measures and reduce the rate,” he said.

The chief minister warned that the government could be forced to take stricter measures if the positivity rate was not reduced.

An official of the Ministry of National Health Services earlier told Dawn that unfortunately, the pandemic had bounced back in the country. “Cases double every five days, the number of patients being hospitalised is increasing and deaths are also being reported. It is worrisome that detection beyond Karachi, Islamabad and Lahore still has no signs of improvement despite repeated push,” he said.

The National Command and Operation Centre (NCOC) on Thursday issued new guidelines suggesting unvaccinated people should not be allowed to enter government offices.

They suggested that Covid awareness programmes should be arranged in government offices and employees be also guided to protect their family members as well.

“They must also be guided to avoid overcrowded places. Mask wearing is mandatory. Social distancing must be part of the seating plan in offices and this must also be ensured during prayers. Hand sanitisers at all entrances and washrooms should be made available.

“The officer responsible must ensure strict adherence to all Covid-19 protocols issued by the NCOC like vaccination, mandatory mask wearing, social distancing and hand sanitisation. Vaccination status should be checked and handshakes avoided,” the guidelines stated.

It has been advised that temperature checking should be ensured at entry points and people with Covid-related symptoms should not be allowed to enter office premises.

“Any person/staff with symptoms like fever, cough, sneezing and shortness of breath must be tested through Covid-19 PCR or Antigen testing. All staff coming back from leave must get negative PCR before joining. Vaccination/booster status must be ensured. Mask wearing, social distancing, and hand sanitisation must be adhered by all staff,” the guidelines stated.

Health authorities have previously said that the new wave of cases in the country could partially be attributed to two sub-variants of the Omicron variant of Covid-19 — BA.4 and BA.5. This meant that the virus would continue to spread fast.