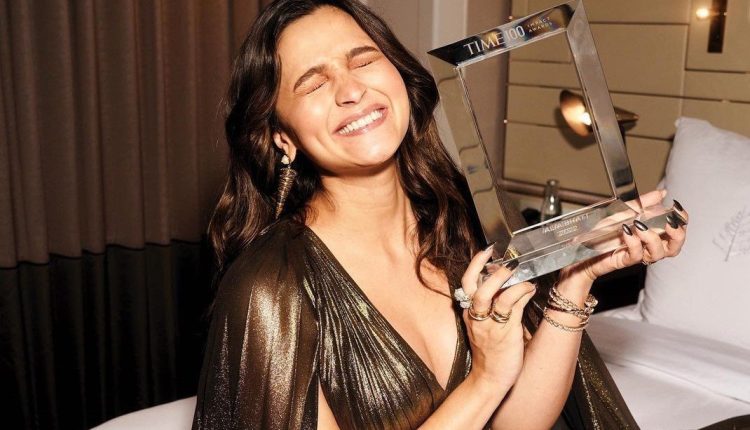 Bollywood diva Alia Bhatt walked on stage to receive yet another addition to her array of trophies celebrating her impactful performances in films. On September 25, the Gangubai Kathiawadi actor was listed in the prestigious Time Magazine list of 100 inspiring people ranging from pioneers, leaders, and titans to artists, innovators, and icons as one of the most influential people of 2022.

On Sunday, proud of the “modern woman” she is – as listed by TIME – Alia shared pictures posing with her TIME100 Impact Award on Instagram. She thanked the magazine for thinking of her. The mommy-to-be is smiling with pride in a shiny metallic bronze gown that flaunts her baby bump beautifully. She also posted pictures cradling her bump.

Alia has had a successful year on the back of critically acclaimed performances in Gangubai Kathiawadi and Darlings. Her film Brahmastra, which stars her alongside husband Ranbir Kapoor, has been one of the year’s biggest blockbusters. “I’ve had some of my biggest releases this year. And I’ve found myself behaving very, very differently with each release — something that I was very surprised by. Way calmer, way more collected, way more resigning to my destiny and to fate,” Alia told TIME in an interview. She was also a part of SS Rajamouli’s RRR.

Up next is Alia’s Hollywood debut Heart of Stone which stars her alongside the American-Israeli actor Gal Gadot. Apart from that, she also has Karan Johar’s Rocky Aur Rani Ki Prem Kahani where she’ll be seen with Ranveer Singh in the lead role.