Afghan women protest on eve of UN day against violence 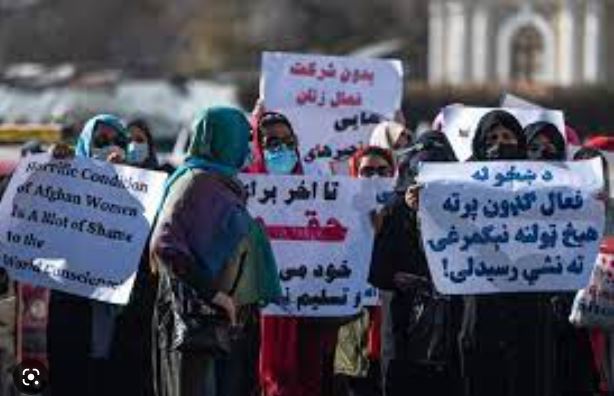 Kabul: Afghan women protested briefly in Kabul, calling for their rights to be recognized on the eve of the UN’s International Day for the Elimination of Violence against Women.

Afghan women have been squeezed out of public life since the Taliban’s return to power in August last year, but small groups have staged flash protests that are usually quickly shut down, sometimes violently.

“We will fight for our rights to the end and we will not surrender,” read a sign in the Dari language carried by one of the protesters.

Most of the group wore dark sunglasses, their heads covered with a veil and a surgical mask obscuring their face.

Taliban fighters kept a close eye on proceedings, while cars marked with the logo of the intelligence services circled the neighborhood.

Most women government workers have lost their jobs — or are being paid a pittance to stay at home — since the Taliban returned to power. Women have also been barred from traveling without a male relative, and must cover up with a burqa or hijab when outside the home.

Schools for teenage girls have also been shuttered across most of the country.

The International Day for the Elimination of Violence against Women is usually marked around the world on November 25.

According to the UN, violence against women and girls remains the most widespread human rights violation in the world, affecting one in three women — a figure largely unchanged over the past 10 years. AFP