Around 100 Hindu pilgrims from India arrive in Pakistan 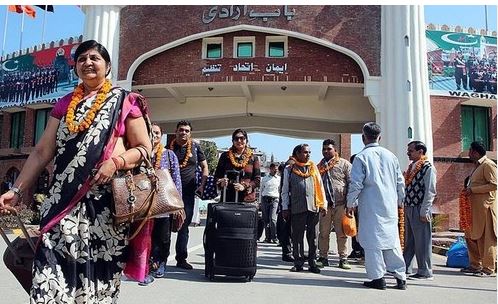 Lahore: A total of 97 Hindu pilgrims from India have arrived in Pakistan through Wagah border to participate in 314th birth anniversary celebrations of Shiv Avtari Satguru Saint Swami Shadaram Sahib.

Upon arrival, the Group leader Yudhister Lal expressed satisfaction over the best arrangements made by the government, the ETPB and other departments for the yatrees.

Shadani Darbar is an over three hundred years old temple and is a sacred place for Hindu devotees from across the globe. The Shadani Darbar was founded in 1786 by Sant Shadaram Sahib, who was born in Lahore in 1708.

Under the Pakistan-India Protocol on Visits to Religious Shrines of 1974, thousands of Sikh and Hindu pilgrims from India visit Pakistan to attend various religious festivals/occasions every year.  Pakistan is home to some of the most significant Sikh pilgrimage sites including the birthplace and final resting place of Baba Guru Nanak.

An ETPB document claims that there are around 195 gurdwaras across Pakistan. The issuance of pilgrimage visas to Hindu and Sikh pilgrims is in line with the Government of Pakistan’s efforts for facilitating visits to religious shrines. It is also reflective of Pakistan’s respect for religious places of all faiths and efforts for promoting interfaith harmony.

Pakistan takes immense pride in preserving holy religious places and providing necessary facilitation to the visiting pilgrims. Pakistan is known around the world for three major religions: Islam, Sikhism and Buddhism. Hinduism is the second largest religion in Pakistan after Islam, according to the 1998 Census. As of 2010, Pakistan had the fifth largest Hindu population in the world and PEW predicts that by 2050 Pakistan will have the fourth largest Hindu population in the world.

According to analysts, allowing international tourism in Pakistan at the same pace as the rest of South Asia would result in a $1.5 billion increase in GDP. Religious tourism can contribute enormously in amplifying Pakistan’s economy by projecting the Muslim, Hindu, Buddhists and Sikh religious sites existing in the country. Pakistan respects all religions and also recognizes the need for promotion of religious tourism in the country.