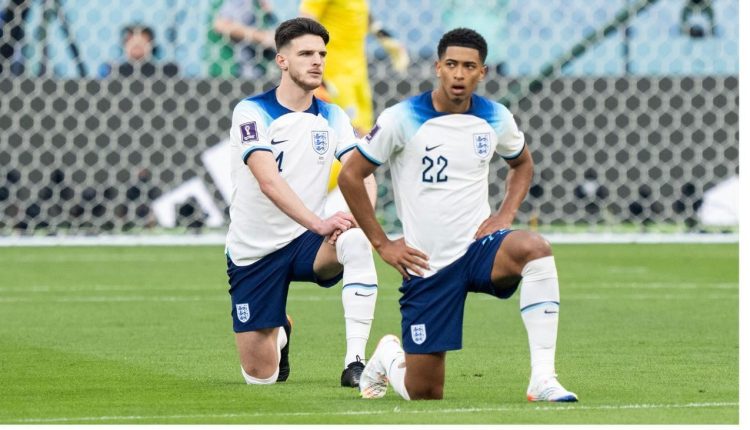 DOHA: Declan Rice said England wanted to “prove a lot of people wrong” after Gareth Southgate’s side celebrated a hugely satisfying 6-2 win in their opening World Cup match against Iran.

Jude Bellingham shone in midfield, Bukayo Saka rewarded the manager’s faith in him after his penalty nightmare at Euro 2020 and substitutes Marcus Rashford and Jack Grealish got on the scoresheet.

Southgate could even walk away with some ammunition to use in urging his team not to be complacent after they conceded twice against 20th-ranked Iran.

England, World Cup semi-finalists in 2018 and European Championship runners-up last year, came to Qatar on the back of a six-game winless run but quickly found their feet at the Khalifa International Stadium, totally dominating the match.

“A real positive start,” said midfielder Rice. “I think there were probably a lot of doubts over us before the start of the tournament and a lot of talk about us not winning in our last six games.

“By our standards and the players we’ve got, we know it hasn’t been good enough. But it’s a World Cup stage, you can see there was a fire in our stomachs tonight to go out there and prove a lot of people wrong.

“We can say it’s ‘only Iran’ but they’ve had some good results… in September they beat Uruguay, drew with Senegal, so they’re a tough side.”

But the West Ham player urged caution, with games to come against the United States and Wales in Group B.

“Real positive performance to start but we can’t get too ahead of ourselves,” he said. “We’ve got the USA next and they’re going to be another level up.”

Rice praised the performance of his midfield partner, 19-year-old Bellingham, who opened the scoring with an impressive header — his first international goal — and was a powerful and creative presence throughout.

“I said to him before the game in the tunnel ‘it’s your stage, go and flourish’ and I’ll be behind you to sweep up and give you the ball to go and do your thing.”