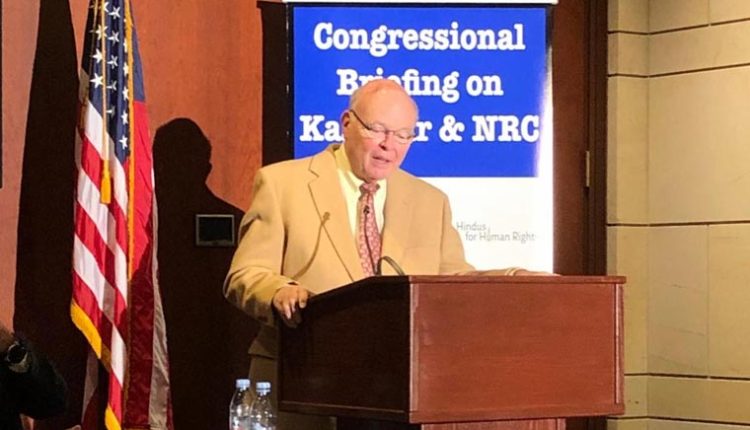 Chicago: The founder and President of the world-renowned human rights organization Genocide Watch Dr. Gregory Stanton has said that India is preparing for genocidal massacres of 200 million Muslims.

He stated this while addressing a panel discussion organized by the Indian American Muslim Council at the annual convention of Islamic Society of North America in Chicago, USA.

Dr Stanton said, “India has all of the preparatory stages for more genocidal massacres”, citing the discriminatory Citizenship Amendment Act (CAA), dehumanization of Muslims through hate speech and the “non-prosecution of lynching and other crimes committed by Hindu against Muslims.”

He added, “Persecution of Muslims is reflected in termination of Kashmir’s autonomy. Much Muslim property has been expropriated or destroyed, and Muslims have been displaced into enclaves. A climate of impunity reigns, in which eyewitnesses to mass murders of their own families have been terrorized into recanting testimony and the killer have been acquitted”.

Dr Stanton also warned about the influence of the Hindu supremacist group RSS, which is the parent ideologue of BJP, saying that RSS now pushes its violent supremacist ideology in, “school, trade unions, cultural societies and religious groups all over India.”

He expressed serious concern that RSS also runs camps of Bajrang Dal, where young Hindu boys are taught the ideology of Hindutva and where hatred and fear of Muslims are openly advocated. These camps receive large financial contributions from Indian abroad, especially through the India Development and Relief Fund.

He warned the international community and stakeholders that the BJP has already played a role in instigating violent and genocidal violence in the past, especially during the anti-Muslim riots in Gujarat in 2002, and that, “preparation for more massacres has already begun.”  Web Desk