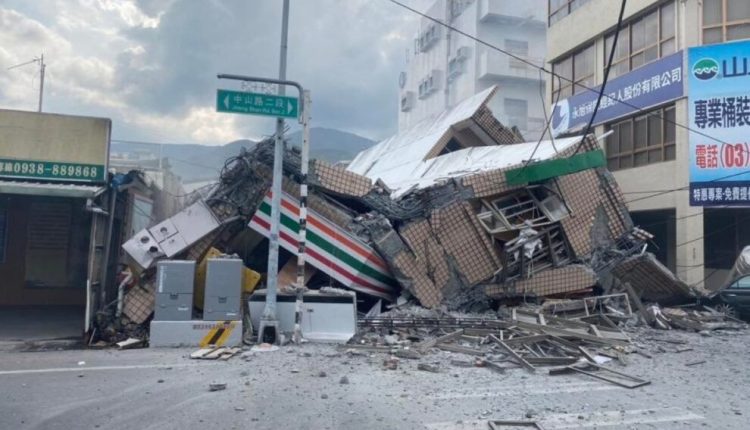 Taipei: A strong earthquake struck southeastern Taiwan, killing at least one person, bringing down a handful of buildings and tearing up roads — but forecasters said the threat of a regional tsunami had passed.

The earthquake hit at 2:44pm (0644 GMT) about 50 kilometres (30 miles) north of the city of Taitung at a depth of 10 kilometres, the United States Geological Survey said.

Its initial strength was given as magnitude 7.2 but the USGS later downgraded it to 6.9. Multiple aftershocks were recorded.

Japan’s Meteorological Agency and the Pacific Tsunami Warning Center issued tsunami advisories shortly after the earthquake, but both later said there was no longer a threat of high waves.

Taiwan’s National Fire Agency said one person was killed by falling machinery at a cement factory in the town of Yuli, which lay close to the epicentre.

The health ministry said 79 people either sought medical treatment or were sent to hospital.

At least three buildings collapsed in Yuli, including one that had a 7-Eleven convenience store on the ground floor. Video footage posted by Taiwan’s Central News Age­ncy showed panicked resi­dents running towards the building, which sent up a thick cloud of dust as it caved in.

The Hualien fire department said four people who were trapped in the building were rescued.

Two other buildings in the town collapsed but no one was inside them, the department added. Two nearby bridges collapsed and two others were damaged.

The Taiwan Railways Administration (TRA) said a train derailed at Dongli station in Hualien after it was hit by concrete from an overhead canopy that came loose during the earthquake .

TRA said the 20 passengers on board were evacuated and no injuries were reported.

Shaking was also felt in the capital Taipei and the southwestern city of Kaoh­siung, with residents posting videos of chandeliers and paintings swaying on social media.

“Water and electricity supplies in some areas are also affected by the earthquake,” she wrote on Facebook. “The related disaster relief work is in full swing.”

Many expressed the kind of resilience that comes with living on an island that frequently experiences earthquakes.

In one video posted online, a man said he was trapped on a bridge where the road at either end had collapsed into a twisted mess of tarmac and concrete.

“This is troublesome,” he could be heard saying. “The whole bridge is broken”.

Ou Chin Te shared footage from the swimming pool on the 60th floor of The One — a skyscraper in Kaohsiung and Taiwan’s fourth-highest building. AFP