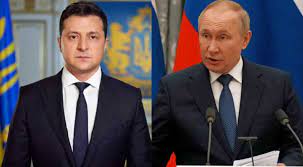 Zelenskyy has warned that Russia, which invaded Ukraine on Feb 24, could try “something particularly ugly” in the run-up to Wednesday s Independence Day, which marks Ukraine s break from Soviet rule.

Kyiv is far from the front lines and has only rarely been hit by Russian missiles since Ukrainian troops repelled a Russian ground offensive to seize the capital in March.

But Kyiv authorities have banned public events related to the anniversary from Monday until Thursday due to the possibility of renewed rocket attacks, a document showed.

Asked at a news conference with visiting Polish President Andrzej Duda about the possibility of a Russian missile strike on Kyiv, Zelenskyy said there was a daily threat of attacks and Ukrainian intelligence was working with foreign intelligence.

“Russia does this all the time. Could Russia increase the amounts of (missile) strikes? Yes, they could do this for the 23rd and 24th (of August),” Zelenskyy said.

“What will Ukraine do if they hit Kyiv? The same as now. Because for me as president, and for every Ukrainian, Kyiv, Chernihiv, Donbas, it is all the same. Ukrainians live there. (And) Kharkiv, Zaporizhzhia.”

He said the response would be the same for any Ukrainian city that comes under attack from Russia.

“(If they hit us, they will receive a response, a powerful response,” Zelenskyy said. “I want to say that each day … this response will grow, it will get stronger and stronger.”

The two sides have traded blame over frequent shelling at the Zaporizhzhia nuclear plant, where Kyiv accuses Moscow of basing troops and storing military hardware. Russia denies this and accuses Ukraine of targeting Zaporizhzhia with drones.

The Office of the UN High Commissioner for Human Rights, citing its monitoring mission in Ukraine, said on Monday 5,587 civilians had been killed and 7,890 wounded between Feb 24 and Aug 21, mainly from artillery, rocket and missile attacks.

UNICEF, the UN children s agency, said at least 972 children have been killed or injured over six months of war. Reuters