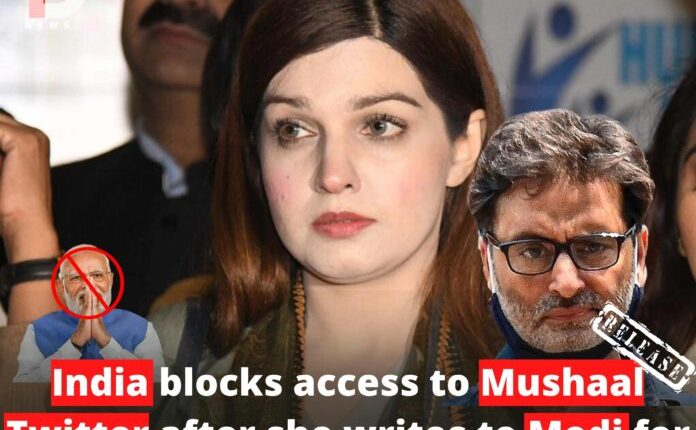 Srinagar: The Indian government has blocked access to the Twitter account of Mushaal Mullick, wife of Kashmiri leader Yasin Malik after she wrote to Indian prime minister seeking her husband’s release.

“My twitter account has been withheld/blocked in India and IIOJK for raising a voice for my oppressed people of Kashmir under Indian Occupation & Jailed Husband Kashmiri Freedom leader Yasin Malik in response to legal demand,” she wrote on Twitter.

In her tweet, she also used hashtag #NoFreedomInIIOJK and #YasinWifeWritesLetter2Modi.

She alarmed that her husband was moving towards slow death due to government’s callous and in view of his precarious health condition that aggravated after his decision to go on a hunger-strike on July 22.

She warned if anything bad happened to the voice of Kashmir freedom struggle, the Indian state would be held responsible for his murder.

Mushaal also appreciated the Ministry of Foreign Affairs Pakistan for making a strong demarche to High Commission for the Republic of India in Islamabad over the fast deteriorating health condition of Yasin Malik.

The Indian government’s decision of blocking Mushaal Mullick’s Twitter account also drew criticism from the netizens who condemned the fascism of the Narendra Modi regime. “Welcome to the club. They blocked my account in India more than a year ago. Here is my advise, open a new account and keep spreading the word,” wrote Tony Ashai, an American architect.

Rehana Ali, a Kashmiri activist in UK said, “You, me and other colleagues are suffering. Twitter is cooperating with India which is violation of Freedom of Expression by India and USA also other countries where twitter is operating.” Web Desk