Climate change and its impact in Pakistan 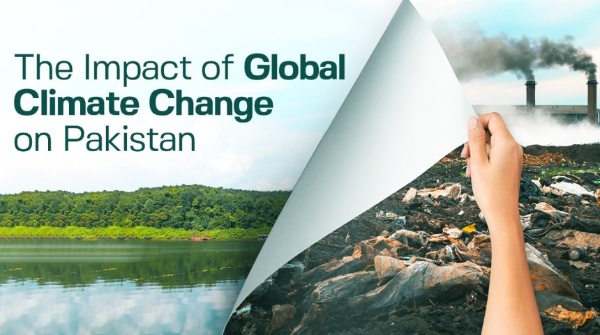 Climate change is the most important issue of our age; we are the first to see its early warning signals and the last to have a chance to prevent it from occurring. Living in a bubble of ignorance can only get us so far; our globe is indeed a scene of melting glaciers, rising floods, animal extinctions, extreme weather events and the list continues. Spreading climate change awareness using every way possible, including seemingly insignificant forms such as writing school essays, cannot be overstated.

Climate change has put a lot of countries at hazard, and the risk is significantly larger for developing countries. Because of this serious problem, which is having a severe impact on the area, South Asia has grown more disaster-prone. In general, it is accelerating and having severe consequences for Pakistan.

Pakistan is geologically located in a region where the effects of climate change are being felt fairly strongly. This climate disaster has had enormous economic, social, and environmental consequences. Statistics from the 2010 floods demonstrate the devastating effects on the 20 million individuals who lost their homes, were injured, or went missing. Similarly, another flood in Pakistan in 2012 wreaked havoc.

Pakistan faces “significantly higher average temperatures than the global average, with a potential rise of 1.3°C-4.9°C by the 2090s over the 1986-2005 baseline,” according to a study, which also noted that Pakistan had “some of the highest disaster risk levels in the world, ranked 18 out of 191 countries by the 2020 Inform Risk Index.”

Under the most optimistic emission scenarios, the global average temperature rise by 2080-99 will be around 3.7°C. Furthermore, changes in Pakistan’s hydrologic regimens, and hence its water supplies, are largely unknown, although dry situations are projected to become more common. Extreme climatic events are expected to become more common and intense, increasing catastrophe risk, particularly for the poor and minority populations.

Many parts of Pakistan endure yearly temperatures of 38°C or more, and when weather patterns combine to produce protracted periods of heatwave, major human health consequences can occur. Between 1997 and 2015, Pakistan witnessed 126 heatwaves, an average of seven each year.

Pakistan is a low-middle-income country with a primarily agrarian economy; however, it is gradually industrializing and more than a third of the population currently lives in cities. For food and nutrition security, the country significantly relies on its climate-sensitive land, water, and forest resources. Agriculture continues to be a significant occupation for 42 percent of the population. Irrigation from the glacier-fed River Indus and its tributaries supports about 90 percent of farmland. Glacier melt has accelerated due to climate change, increasing the likelihood of glacier lake outpouring floods (GLOF) and mudslides downstream. Faster glacier melt, rising temperatures, shifting seasons, and irregular rainfall patterns are all affecting the flow of the River Indus, which will have a growing impact on agriculture, food production, and lives. Already, 39 percent of the population lives in poverty, and the loss of livelihoods will have a significant impact on people’s health and capacity to access healthcare.

Heat fatigue, starvation, the introduction of vector-borne diseases like dengue fever, and an increase in the burden of aquatic infections will all have an impact on people’s capacity to work and make a living.

Migrants, internally displaced individuals, and religious and ethnic minorities will be particularly susceptible, since they are frequently confined to hazard-prone land and face challenges to treatment, including financial constraints resulting from informal work. Child marriages, early births, and domestic violence may become more common as a result of climate issue. Due to decreasing food production, women and children will be more prone to malnourishment and malnutrition.

Smog is another major issue in Pakistan’s industrialized eastern Punjab region, where the provincial capital, Lahore, is clogged with smoke throughout the winter months. Millions of impoverished people will confront significant problems as the climate changes, including severe events, health consequences, social protection, economic stability, mobility, water security, cultural heritage, and other dangers.

Climate change is inextricably linked to global inequality patterns. It harms the most vulnerable individuals the most, although they contribute the least to the catastrophe. Millions of vulnerable people are facing disproportionate problems as the effects of climate change worsen in terms of severe events, health effects, food security, economic assurance, water security, and cultural identity. Female-headed families, children, persons with disabilities, Indigenous Peoples and ethnic minorities, landless tenants, migrant workers, displaced persons, sexual and gender minorities, older people, and other socially excluded groups are all highly prone to disasters. Their vulnerability stems from a variety of factors, including their geographic location, financial, socioeconomic, cultural, and gender status, as well as their access to medical care, decision-making, and justice.

Poor and oppressed people are demanding for more aggressive climate action. Climate change is more than an environmental disaster; it is also a social crisis that requires us to confront issues of inequality on many levels: between rich and poor nations; between men and women; and between generations. For more effective development outcomes, the Intergovernmental Panel on Climate Change (IPCC) has underlined the need for climate solutions that adhere to climate justice principles (i.e., recognition, procedural, and distributive justice).

Climate change mitigation initiatives frequently disproportionately affect the most disadvantaged. Climate change adaptation measures can impose a greater financial burden on poor households in the absence of well-designed and supportive policies; for example, policies to expand public transportation or carbon pricing may result in higher public transportation fares, which will disproportionately affect poorer households. Similarly, restricting forestry activities to particular periods of the year might have an impact on indigenous populations that rely on woods for their livelihoods all year. In addition to addressing the distributional effects of decarbonizing economies, there is a need to understand and address social inclusion, cultural, and political economy issues, such as deciding on the types of transitions required (economic, social, etc.) and identifying opportunities to address social inequality during these processes.

In creating climate resilience, the IPCC’s newest report highlights the relevance of many types of knowledge such as scientific, Indigenous, and local knowledge. Communities and marginalized people may be connected to higher-level policy, technical, and financial support for locally relevant and successful development outcomes through innovations in climate finance architecture.